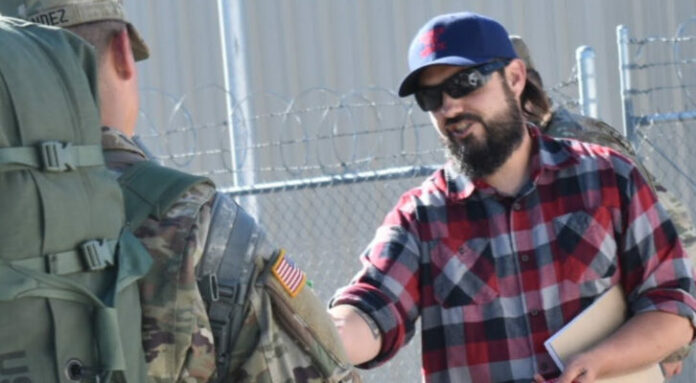 When the events of Jan. 6 unfolded and Americans saw their federal Capitol building overrun by their fellow countrymen, guess which local figure started getting calls from the national media. If you guessed the leader of the Real 3%ers Idaho, Eric Parker, you guessed right.

In the days following what the country is still collectively trying to wrap its head around, NPR, ABC, The Guardian, and a few other media outlets contacted Parker to ask questions about the group he leads and to get his perspective on—or his involvement in—the siege on the U.S. Capitol that led to five deaths, a couple dozen terrorism investigations, hundreds of arrests and counting, and one nation with clearly two different realities.

Wood River Weekly contacted Parker, too. After all, he is a sort of poster child for resistance against the government after pleading guilty to misdemeanor obstruction charges when he aimed his long rifle at federal agents during the Bundy Ranch standoff in 2014. What follows are overviews of Parker’s reactions and answers to a variety of topics we discussed with him in relation to the 2020 election and the Jan. 6 siege on the U.S. Capitol.

Although the Real 3%ers Idaho had made no official public comment, Parker was 100% clear that the group he leads had 0% to do with the events of Jan. 6.

“The Real 3%ers Idaho had nothing to do with Jan. 6, period,” Parker said.

It does need to be addressed that 3%er flags did show up at the Capitol building along with Confederate flags, Nazi flags, and more. However, as previously reported, Parker says the local 3%er group has no formal connection to the national group.

“We involve ourselves with legislation. That’s the way things have really changed,” said Parker, who in the 2020 election ran for but lost the Idaho State Legislature seat for District 26.

Parker added, “If anything, our group would physically defend a Capitol building.”

Parker also stated that one of the leading domestic terrorist monitoring organizations did not have the Real 3%ers of Idaho on any risk assessment list.

We asked Parker if he personally believes the election was stolen from President Donald Trump. His initial answer was that he saw no evidence behind any of the claims made by the Trump campaign and the president himself. However, as the interview went on, Parker did acknowledge that he can’t say he’s seen definitive evidence that no election tampering occurred either. What’s fair and clear to say is that Parker holds no firm belief that the country is being stolen from anyone nor that a constitutional process like the counting of Electoral College votes should be forcefully stopped.

So, what’s the country to do now? Parker leans toward the side of riding out the last days of the Trump administration without invoking the 25th Amendment or launching a second round of impeachment.

“I think we need to be very careful because emotions are so high,” Parker said. “In times like these it’s very quickly we pass laws like the Patriot Act.”

Parker’s point is that the laws one side of the political spectrum may want now can be used against them later. Case in point: When Republican Senator Mitch McConnell would not hold a hearing for then-President Barack Obama’s Supreme Court nominee Merrick Garland because Obama was in the final year of his term, but did hold a hearing for Trump nominee Amy Coney Barrett just weeks before an election Trump ultimately lost. Americans can rest assured that at some point in the future that table will turn and Democrats will run that power play.