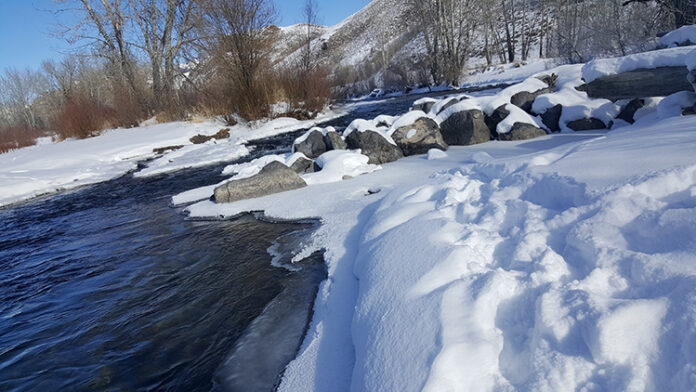 The older I get, the more deliberately I try to re-remember the sense of wonder that seemed easier to have handy when I was younger. There’s plenty of ways for me to work on this: long walks in the woods usually help; a good book can go a long way; a conversation with an excited science student works great.

But, the pull of the daily habits of our lives can often be a pull toward complacency or apathy or indifference to the world around us. It’s a lot easier to trudge on past an interesting animal track in my front yard (“I’m late!”) or to sleep in too late to see a meteor shower or a lunar eclipse (“I’m tired!”) or to choose not to take the time to walk down to the river to see what the ice is doing (“I’m cold!”).

I know that this can happen to me, and I don’t really want it to. So, I try to work on it.

Lately, what I have been focusing on is watching the snow. As any of you will know, it’s been snowing here lately. Like, a lot. We have gone from almost no snowpack a month ago to quite-far-above-average snowpack in the past few weeks, and the impact on the landscape has been absolutely transformational.

My lower back pain has also certainly been transformational, but shoveling the snow out of my driveway seems (usually) a fair price to pay for the absolutely gobsmacking way that this world that we live in provides us with such surprises as snowstorms.

When water freezes to ice, it can do so as a crystal. This is where the most fascinating patterns and shapes occur—picture snowflakes (which exhibit an extraordinary degree of randomness and unpredictability, even though they are almost all built off of certain formations, such as the six-sided-ness)—or those unbelievably beautiful, thin, translucent feathers of frost that can form on windows.

The formation of ice crystals follows the same physical rulebooks as the formation of other crystals. There’s a certain geometry involved, unique to each chemical structure, and the shapes that form in crystals are distinctive and diagnostic.

Forget not, that each snow crystal was formed out of thin air—water vapor, one of the most easily underappreciated substances there is (“all it does is fog up my glasses!”), transforming from an invisible gas into tiny, solid, crystalline gifts from the sky.

People display crystals made of other substances on their desks, shelves, and on rings on their fingers—these other kinds of crystals are rarer, surely, than ice crystals (as I type this, several million ice crystals are falling out of the sky each second—imagine if cut diamonds did that!), but it does sometimes strike me as an interesting thought that we are so used to these astounding crystals laying around that we brusquely shovel and plow and pummel them into pieces when they are in our way.

A person could be forgiven for getting a bit jaded about this planet we are on. After all, none of us has ever been to another planet (unless there are extraterrestrials hiding among us, which some folks seem to consider a plausible possibility). But, what a world. What a moment in the history of the universe.