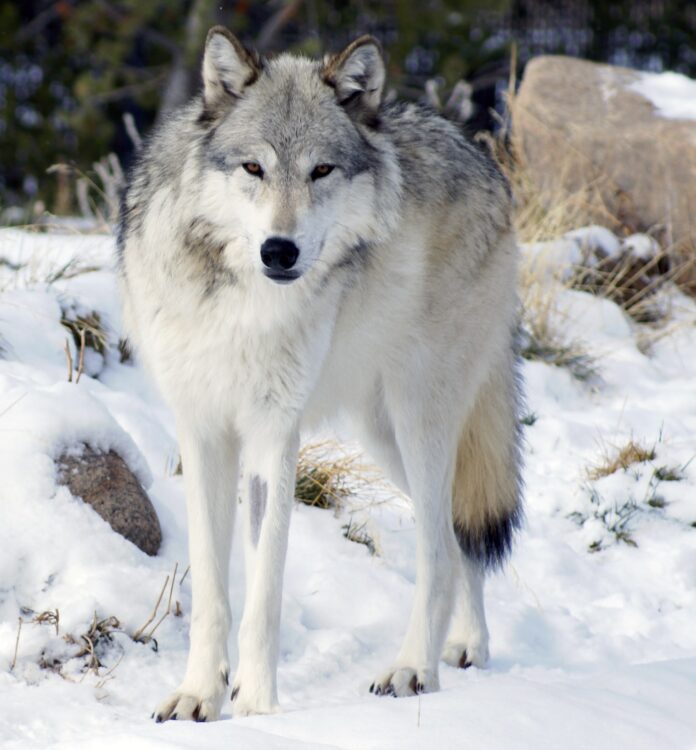 A two-year-old wolf named OR-93 crossed into Northern California on Jan. 30, 2020. He possessed a GPS collar courtesy of U.S. Fish and Wildlife Service and a yearning for immortality provided by his mix of roughly 20,000 genes. OR-93 was a disperser wolf who had left his natal pack near Mount Hood, Oregon, to find a mate. He chose south.

So far, OR-93 has taken a celibate path, for there are only one or two wolf packs in California and OR-93 blew by them southward on an odyssey through the nation’s most populous state. At least 16 counties and 1,000 miles later, his collar stopped working after April 5, 2021, when he was in San Luis Obispo County! Did OR-93’s gaze fall upon Spanish missions and the sun setting in the Pacific Ocean?

With a baleful future in this lonesome land, wolf OR-93 had fallen off the wolf watchers’ radar. He had by this time survived crossing Highway 99 and Interstate 5, countless barbed-wire fences and myriad hazards posed by 40 million people and 15 million vehicles. But then he was detected one more time.

A camera trap videoed him on May 15 near a place called Wind Wolves Preserve, in southwestern Kern County, about 40 miles as the condor flies from Santa Barbara, or 30 miles from Bakersfield. Known for Buck Owens, Merle Haggard, forests of pumpjacks, miserable heat, and chronic problems with agricultural drainage and selenium, Kern County is a long way in every respect from OR-93’s Canadian roots.

The genes in OR-93’s deck are almost certainly linked to the 15 wolves that were captured in southwestern Alberta in December 1994 and then reintroduced near Corn Creek along the Salmon River, epicenter for Idaho rafting and kayaking. Or maybe his genes came from the 21 wolves captured in northeastern British Columbia and released at Dagger Falls, on the Middle Fork of the Salmon River, in January 1996. Maybe OR-93 is from both these new Idaho populations, whose descendants first entered Oregon in 1999.

Some accusingly assert that the wolves we now have in Idaho are “Canadian wolves,” which is true; their recent ancestors came from two regions of western Canada (there may be a few non-transplanted wolves in the genetic mix that walked here on their own, also from Canada). But if OR-93 can lope from northern Oregon to the Tehachapi range in California in 18 months, taking his genes every step of the way, couldn’t his ancestors have done something similar, heading north, even?

But OR-93’s case is probably one for the record books. There have always been disperser wolves, youngsters desirous of establishing their own pack, or maybe tired of being thrashed by their more dominant pack mates. Dispersers leave their natal pack and one of two things happen: they die (maybe they are killed by another wolf pack) or they succeed in finding a mate and try immortality by passing their genes on to their own litter. When OR-93 entered a vast wolfless landscape, he just kept going, running the country through his nose in search of a mate that he is unlikely to find.

In pre-European times before wolves had been extirpated from all western states, disperser wolves like OR-93 didn’t have to travel as far before meeting their end or their mate. The lucky and fitter individuals passed their genes generationally through the eons, ebbing and flowing in all directions suitable for the wolf niche. And now the genes in the wolves of British Columbia are the same genes of the wolves that once lived, and now live again, in the Northern Rockies. Wolf OR-93 and his kin in western North America are one species, Canis lupus.

Larry Barnes retired from 26 years as a biology teacher at Wood River High School and is now transitioning to full-time amateur exploration of the natural world.