911, Sheriff’s At The Ready For Valley’s Vulnerable

The Year Of The Woman

Experts To Give Talk On Wolves, Livestock Conflicts

19 Wagon Days Posters Up For Bid, For Charity

Staying Cool And Keeping Safe On The Water

What Are You Holding In? 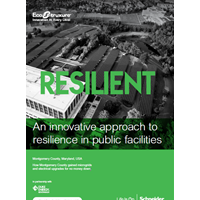 Does this sound familiar?  “ _______ County found itself with a sizeable problem.  Two pivotal events occurred, the first in 2012 when a devastating storm caused widespread power outages.  The storm was reason enough for the county to seek better resilience. But the electrical infrastructure was beginning to show its age. The challenge; gaining resilience, going green, updating infrastructure—without breaking the budget.”

This story is not about Blaine County, Idaho, but Montgomery County in Maryland.  In 2014 Montgomery County put out an RFP for solutions and Schneider Electric offered a plan in concert with Duke Energy Renewables “that would allow the county to install two advanced microgrids and upgrade aging electrical infrastructure—all without any upfront investment. This was done using what’s known as an Energy-as-a-Service (EaaS) agreement.”

The project included a microgrid at the Public Safety Headquarters, including 2 MWs of solar panels producing 3.3 million kWh per year, advanced cybersecurity, natural gas generators, electric vehicle charging, combined heat and power plants, and $4 million of electrical distribution upgrades. The long-term contract created a locked-in energy rate so that the county avoids market-price escalations of electricity in the future.

“Having the microgrids will give the county an edge when the next big storm hits. Microgrids typically run in parallel with the utility grid but when a power outage occurs, the microgrid will island from the grid. Protected from the grid disturbance, the microgrids will then power the correctional facility and public safety headquarters with its on-site resources, in this case solar, trigeneration, and natural gas generators. When the grid is restored, the microgrid reconnects and relies on a mix of its on-site resources and utility power, depending on which is advantageous for the county at any given time… The two microgrids are expected to reduce greenhouse gas emissions by 6,800 metric tons each year.”

Schneider Electric is a big company with annual revenue of over $27 billion and 135,000 employees globally. In North America, Schneider Electric is making a big move right now in 2020 into smaller microgrids (under 5 MW of load) as they see a massive market in small to medium-sized buildings needing cost savings as well as resiliency from fire events and power outages.

“Mark Feasel, Schneider’s president of smart grid, North America, described the company’s journey as a drive to change the energy landscape. He said that the market’s first step toward transformation began about five years ago when technology allowed easier integration of renewable energy into microgrids. This expanded the value proposition, particularly as renewables dropped in cost. Now microgrids not only promised resilience—a benefit that gave them appeal to hospitals, military bases and data centers—but they also offered sustainability with a better price point.”

Sun Valley Company already has a microgrid of sorts, including an agreement with Idaho Power to be self-operating on their campus with some solar and a diesel generator, but it certainly could add some batteries and have greater resiliency. I’m sure Schneider Electric would be most happy to quote them a no-money-down, Energy-as-a-Service option. Blaine County can be a success story like Montgomery County and spend the $38 million Idaho Power wants from us on true backup energy, with generators and batteries in our north county rather than on a non-solution.

911, Sheriff’s At The Ready For Valley’s Vulnerable

The Year Of The Woman

What Are You Holding In?