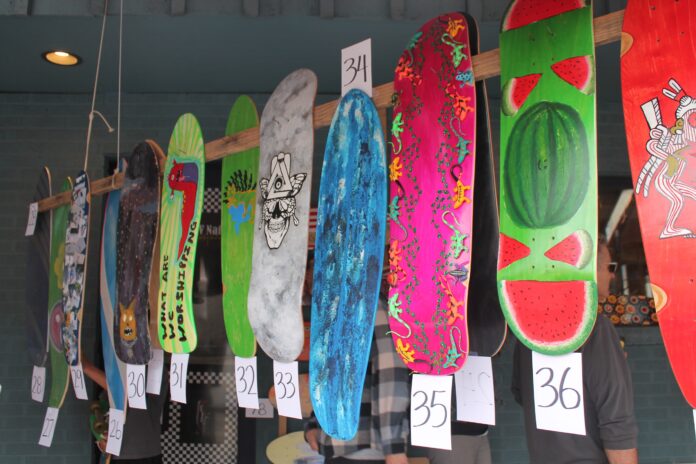 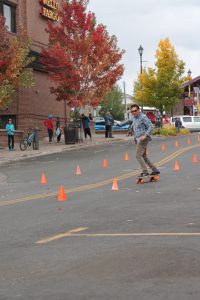 On Sunday, Sept. 30, the Board Bin and the City of Ketchum partnered to host the 4th Street Party on the blocks surrounding the Board Bin. The party coincided with the Board Bin’s 30th anniversary and was also host to the second annual Art Decko art auction as well as their semi-regular “Massacre on 4th Street” skateboard slalom, which they have hosted on and off in the past.

The event took place from 1-8 p.m. and featured food from both Rickshaw and The Burger Grill, beer from the Hot Water Inn, a bouncy house for kids, a table from the Environmental Resource Center, Board Bin 30th-anniversary T-shirts, and a raffle to win a snowboard. Taking the stage were local bands the Hurdy Gurdy Girls and Andrew Sheppard.

Now in its second year, the Art Decko art show and auction featured roughly 80 skateboard decks painted by various individuals in town. Proceeds of the show will go to the Guy Coles Skate Park in Ketchum.

Running down 4th Street for several blocks were a series of cones set up for the “Massacre on 4th Street” skateboard slalom in which skateboarders weave in between the cones. Skateboarders of all ages ran to the top of the course over and over to experience the thrill. Board Bin owner and city councilmember Jim Slanetz did the course several times, with his dog Luna chasing right behind him.

“We wanted to give people something to do on a Sunday before everyone goes into hibernation for the winter,” Slanetz said.

Halfway through the celebration was the Idahound dog show, with categories such as Best Costume, Master Lookalike and Kid Handler.

The event had an air of nostalgia as people surveyed photos of Jim and his wife Karin Reichow, who he opened the Board Bin with in 1988. One of the Art Decko skate decks depicted Jim as a tribute to the man who made skateboard and snowboard culture in Ketchum so rich.