In the film “Gladiator,” Russell Crowe’s character—a general in the Roman army—is asked by Emperor Marcus Aurelius this question: “What is Rome?” The loyal officer responds: “I’ve seen much of the world. It is brutal and cruel and dark. Rome is the light.”

For Robbie Walden, the harsher world is his personal past, and the light is his focused vocation to share his truth as a member of Life Church in Hailey and beyond, specifically through his nonprofit organization, It Takes A Village Ministries. 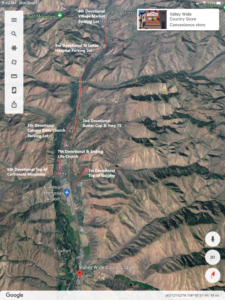 “I’ve tried everything under the sun … but only one thing changed anything or fixed anything, my faith in Jesus Christ,” explains Walden, the Iraqi war veteran and Purple Heart recipient who had battled PTSD and other conditions for years.

It is with that level of earnestness and excitement that Walden and his wife Yvonne are launching what they plan to be an annual weekend of worship here called Cross Walk. The three-day affair takes place June 11 to 13 with a 33-mile cross-bearing hike on that Saturday, June 12, up two mountains: Quigley and Carbonate.

The Friday event is called “Music on the Mountain” where Walden, a one-time Nashville singer-songwriter with Curb Records, will perform atop Quigley Mountain and hold a prayer service.

“We’ll be praying for our graduates, our country, our Valley. Everybody’s welcome,” Walden said.

The 33-mile excursion on Saturday will be new for the Valley, but not for Walden. He’s taken part in a 100-mile version of the event in Louisiana where he literally carried the cross up the local mountain there. The event, Walden said, has also been taking place for about a decade now, in Pennsylvania and Oklahoma. While participants should be dressed in athletic wear and hiking or running shoes, Walden said the pace won’t be grueling for the average person. In addition, there will be a shuttle service at seven different locations from Bellevue to Ketchum where people can tap out or tap in.

“The van is going to have everything we’ll need—snacks, water, sunblock, basic first-aid,” Walden said.

On Sunday, the event settles in at Life Church at 931 North River Street in Hailey, where Walden is a member, for a more traditional sermon. Details on meeting times and locations can be found on Walden’s nonprofit ministry website ItTakesAVillageMinistries.org.

Walden’s last five years have been spent here in the Valley. But it’s his years prior that led him to his life’s calling. In his youth, Walden was adopted by a family after suffering what he called “severe child abuse” and “something you battle as a kid and as an adult.”

Despite the rough start in life, Walden excelled at both athletics and music. He was offered a full-ride scholarship to wrestle for the University of Oregon, but turned it down. The Army had an even better offer: to wrestle for the All-Army Wrestling Team, a sort of feeder program for the Team USA Olympic wrestling. Walden burned out on wrestling rather quickly, but not from life in the military. He earned the rank of sergeant and was a part of special operations unit.

In 2001, during the events of 9/11, Walden was stationed at a base in New York. He was part of the rescue crews who discovered the remains of the victims there. By 2004, he was serving in Iraq when his team got ambushed. Walden survived it but not before taking a bullet to the heart-side of his chest near his shoulder, an injury that produced a Purple Heart Award and three surgeries that has left him with “a system of  eight pulleys” in his shoulder so his upper-body muscles operate properly.

“Overall, I’m blessed,” observed Walden, who said more than 10 of his military buddies are no longer alive, not due to war, but to its aftermath—suicide.

So it’s little wonder that many of the people who now worship with Walden and take part in the Cross Walks around the nation are military veterans.

“Seek and you shall find,” Walden says, quoting scripture. “I really see myself as an evangelist. I want to share my story everywhere I can.”