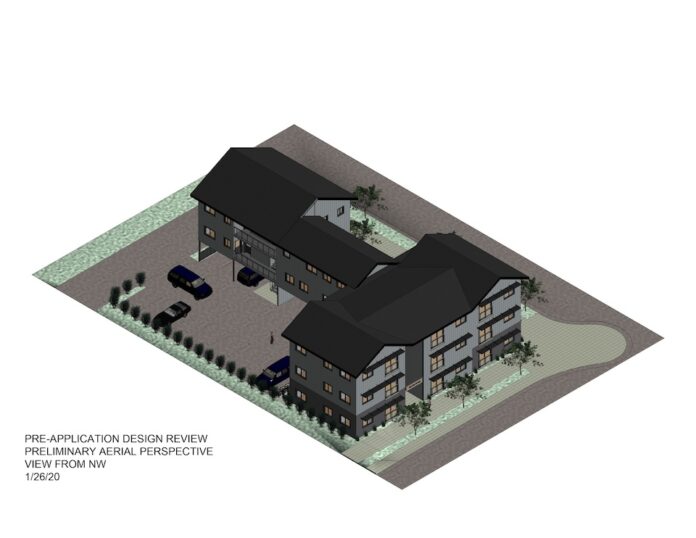 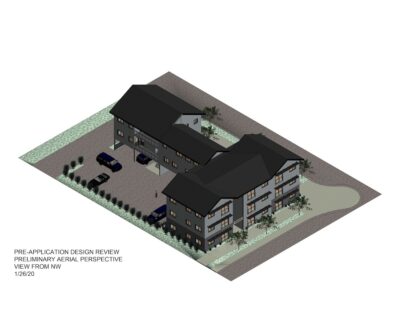 The vision—which went through its first set of city eyes at Monday night’s preliminary design review—is “to have rents on the modest end of the rental scale and some apartments will be smaller studios to provide an even more affordable option,” a statement from the developers said.

“They loved it,” said Tidwell, referring to Monday’s cursory review. “It’s exactly what they wanted.”

The developers are attempting to meet the stringent Downtown Residential Overlay District standards, developed by the city two years ago, to allow for increased housing density downtown. The housing plan—currently in the so-called pre-application phase—calls for an all-electric, energy efficient building, with solar panels on the roof, battery storage, a community garden, 1,256 square feet of common open space, covered parking and storage units. The housing would consist of eight two-bedroom units, five one-bedroom units, two studio units, and one ADA-accessible unit.

“All consortium members wanted to provide a modest rent, market solution to the lack of worker housing,” the developers said.

It won’t come without some pushback around the community as evidenced by comments online regarding the effort. Tidwell is unphased.

“Density belongs in the urban center. Utilities and services are set up to handle it there,” Tidwell said. “I thanked the committee for having the foresight to design the city plan this way. We’re not asking for anything extra.”

Specifically, Gary Poole and Paul Conrad, owners of a painting business and construction business respectively, know how difficult it has been to attract workers with the dearth of housing options that fit their salaries. Tidwell, who is running for election to the Blaine County Board of Commissioners, wanted to demonstrate that housing could be successfully built in areas recently rezoned in Hailey for higher density.

“There are opportunities right here in our Valley to achieve investment financial returns along with social goals ‘mission’ returns.” Tidwell wrote in a statement.

Scovell has previously donated her architectural time to nonprofits, most recently the Men’s Recovery Center, and she has been working efficiently to keep architectural fees to a minimum on this project as their contribution to affordable housing.

Conrad, as a longtime local builder, worked alongside the architectural team to design a building that maximizes construction efficiencies to keep the rents as low as possible. Tidwell believes that the building will provide a fair deal for residents: modest rent, low electrical bills, and amenities like storage units and covered parking that add up to long-term livability .

Poole and his family have long owned the land and have hoped to provide such a building for the community. He will be working closely with Conrad to bring in the project on time and on budget.

The consortium still has a development hurdle to jump in March when it goes before the full Planning & Zoning commission. They hope to break ground in April, with a late 2020 finish date.