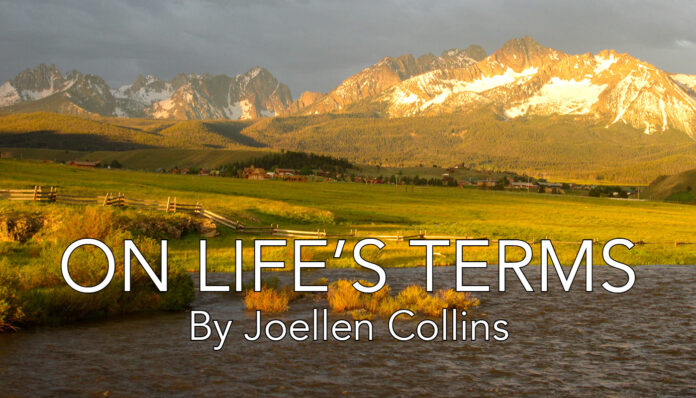 Through an odd series of communications, I discovered two nights before Thanksgiving that my reservation had either been misplaced or ignored and I was not listed on any round-trip from Boise to Phoenix November 23 and back on Sunday, the 27th. The gory details are not interesting to explain, but when the alarm went off at 5 a.m. on Wednesday morning, when I had imagined I would drive to Boise at 5:30, I was hit by three emotions. The first was relief that I had not driven all the way to Boise to then be told that I had no ticket; the second a wave of sadness that I would not be sharing this holiday in Scottsdale with my “new family” from Oklahoma. I had looked forward to laughing with my brother and his wife, my two nieces and their four boys, and even, perhaps, lolling in warm weather by the swimming pool or reading a good book between conversations. It is hard to meet with my birth family because of the distance, so this was to be special.

However, my third emotion was different. I told myself that, of course, I would miss being with either that family or that of my grandchildren and kin in California, but I have learned to “roll with the punches,” an apt though relevant cliché. I needed to accept the circumstance of this weekend with positivity.

I called my friend who takes care of my doggy (Suki) to say I would pick her up shortly, since I was not going to Scottsdale and had dropped her off a day early due to my drive at the crack of dawn. My friend immediately invited me to share a dinner with them. While I had reconciled myself to a lack of turkey and cranberry sauce, I instantly accepted their kind offer and spent the day getting to know both my friend and her significant other in a fresh and fascinating way. I left later with my cuddly dog in tow, relishing the feeling of thankfulness that filled my heart.

I also realized that friends were in town for the weekend and that now it might be possible to have a visit since I would unexpectedly be here, so I called to say “hello.” They invited me to visit on Friday at the condo they had rented not far from mine in Ketchum. Our relationship is unusual and too complex to review here, but it suffices to say that I spent one of the loveliest evenings of my entire life with them. We shared a deep friendship with someone we all knew for decades who died about this time last year. We recalled memories about the man who had influenced our lives so much, initiating hugs and emotions. I felt almost a part of their family, many of whom often visit Sun Valley.

I can’t think of a better reason for giving thanks: I experienced an unexpected and delightful ending, which lingers as a reminder of what is positive in my life.