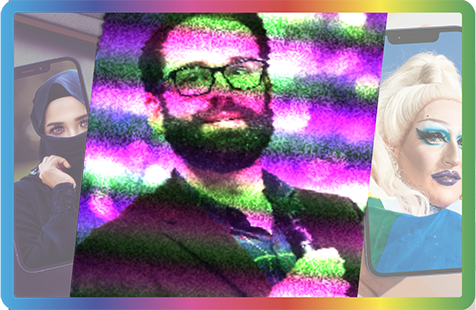 There needs to be a show … one that reveals a certain type of creativity that is distinctly American—sometimes irreverent, usually smart, always more deliberate than subtle, and without question self-centered, in the good way. When I peruse the many streamed offerings these days, I don’t sense a dearth of at least compelling and in some cases excellent content. There’s lots of good stuff out there, from two-plus-hour Oscar-nominated movies to seasons 1 through 6 of Emmy-winning shows.

And that’s the problem. I don’t ever have that much time.

So I find myself scrolling my phone a lot—as in, way too much a lot. The kind of too much I call a ‘rabbit hole,’ a place where internal time stops and external time gets away. Yet, it’s for good reason. Since the advent of TikTok—a medium known for brevity and video—the major social media players like Meta (Facebook and Instagram) and YouTube (Google) have followed suit by pushing short video content to its user base, too. For whatever reason Facebook ‘Reels’ work best for me, in terms of convenience and algorithm-correctness—that formulaic, artificial intelligence accuracy of knowing which content I’ll like and which content I’ll hate just enough to keep watching until the ad, which tries so hard to not look like an ad, comes across my screen.

Dominating the hate-end of my algorithm spectrum these days is a social media, social conservative influencer named Matt Walsh. I’m sure he has other pet projects he wants you to think will save the world, but right now he’s hawking his ‘documentary’ called What Is a Woman? If Hollywood turned transphobic overnight, it would still not win an Oscar. This is not a review of the film, since I didn’t—and won’t—see it. I watched the trailer and dozens of his Reels and can firmly guarantee a thumb’s down from me.

What is a real woman, anyway?

As world culture—parts of it, at least—transitions toward a societal respe… a societal understa… a societal toleran… a societal ‘realization’ that sex and gender are two different words (because they in fact mean two different things), Walsh and other sociopolitical influencers like Ben Shapiro and Jordan Peterson have jumped on this perspective shift, too. Apparently, mainstream media is not the only media that likes to do things for the ratings.

Shapiro is a popular podcast host and editor of The Daily Wire. He speaks rapid-fire and fact-based, he’s a true intellectual with a pro-religious—Judao-Christian to be precise—bias. He’s transparent about his faith, so I take no issue with him using it in his argumentation. My problem with Shapiro is when his verbal speed gets used in, let’s say, a five-step line of argumentation arriving at a conclusion. Too often though, all the way back at step two or three, Shapiro commits factual error or factual cherry-picking. Worse, his arguments sometimes include assumptions that if wrong make his argument fall apart (by the way, this is what ‘begging the question’ actually means).

Shapiro takes the approach that gender fluidity is psychological disorder at worst and an emotional immaturity at best. He’ll ask, let’s say, white 30-year-old females if they can identify as 60 and Black. And that’s when the next Reel hits your screen. He’s not much kinder than Walsh, but at least he’s trying. If you want to get under his skin, tell him/them your pronouns aren’t what he/they thinks they are.

That’d bug Peterson, too, who’s country (Canada) passed legislation protecting gender expression even when it comes to pronoun usage. Peterson is a clinical psychologist, author, and professor emeritus at the University of Toronto who has become a popular podcaster and public speaker currently on a world tour. A true academic, all political correctness zeitgeists have passed his personality by. That’s not to say he isn’t well-mannered. All Canadians are well-mannered, right?

Peterson, the ever-curious psychologist, dissects issues like gender identity scientifically and philosophically. He asks questions, he provides data, and he constructs his version of an ethical solution, some of which—ironically for a modern conservative—err on the side of protecting society at the expense of the individual. Recently, Peterson noted how there are naturally effeminate men and naturally masculine women—all of whom have the right to feel safe and free.

“But what are we going to do, start carving them up?” Peterson, referring to sex-change operations, remarked in his trademark shrill.

And then there’s Walsh:

A practicing Catholic, who has demonstrated very little Christ-like behavior in his career. His documentary is riddled with corroborated claims of journalistic fraud, which explains clip after clip of a smug Walsh—that’s his default behavioral identity—befuddling and/or shaming trans people.

Father of six children. Walsh may stop practicing Catholicism in the bedroom when he learns that 1.4% of youth ages 13 to 17 in the U.S. identify as transgender.

Proudly not college-educated, which is admirable when someone develops skill and/or expertise regardless, Walsh’s skill is to be a provocateur, not much else. He says gender is based on sex, but when someone asks him about hermaphrodites, he says it’s irrelevant because hermaphrodites are still only capable of producing one type of gamete (sperm or ova). Using Walsh’s logic then, you aren’t a real male or female until you’re fertile.

But at least he’s consistent. He plays dumb and unphased externally. And he’s pretty stupid and insensitive on the inside, too.

Editor’s Note: According to a study by the UCLA Williams Institute, there are 7,000 Idaho adults and 1,000 Idaho youth who are transgender. When you come across them, remember that pronouns are typically used to talk about someone, not to someone. So you won’t need to learn or use each others’ pronouns, if you engage one another directly, and with kindness, too.