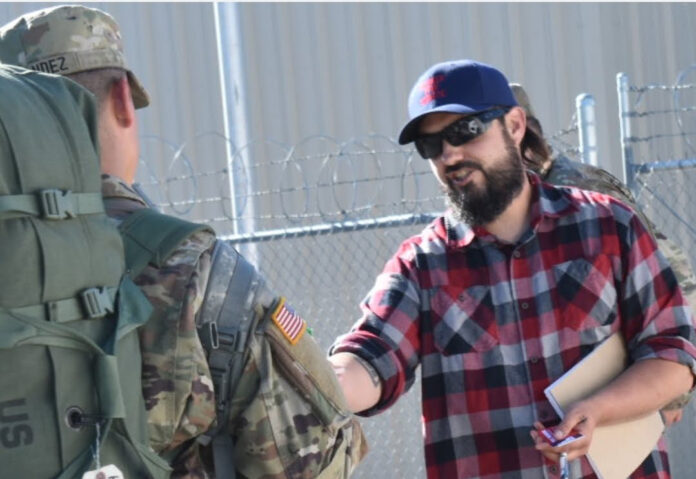 Three-percenter goes from federal custody to campaigning for Idaho Senate

In April 2014, Hailey resident Eric Parker became an icon. That’s when Reuters photographer Jim Urquhart pointed his camera lens at a prone-positioned Parker lying between concrete roadside barriers with his high-capacity rifle aimed at federal officers who were in a standoff at Cliven Bundy’s ranch.

By 2016, Parker’s involvement in the matter put him in hot water with federal authorities and nearly landed him in prison for decades. Two hung-jury trials later and facing a third trial, Parker pled guilty to misdemeanor obstruction of a court order.

Cut to 2020: And now, Parker has his sight set on the Idaho State Legislature; specifically, the Senate seat occupied since 2010 by Michelle Stennett (D/Ketchum) who, if it were not for Parker, would be running unopposed.

“I’m strongly against the idea of anyone running unopposed. I want to give District 26 a second option,” Parker said.

Parker, 36, describes his chances of winning as “probably pretty low” and says polls and which candidate has more financial backing or endorsements are things he doesn’t “think about much.” Nonetheless, given the events of the last two months—specifically, the pandemic and the Black Lives Matter movement—he thinks voters may be thinking a little differently these days.

Parker said in the discussions he’s having with voters, recovering from the economic downturn— triggered by the lockdowns and phased reopenings—has become a priority. Since the economic crisis seems to be impacting small businesses, blue-collar workers and service industry folks most, it’s not a stretch that a sort of populist candidate like Parker could make some headway with voters.

“I’m a working-class candidate and I think we need more working-class political representatives,” Parker said. “This is about getting Main Street back on track.”

Parker, an electrician, noted that the frustration is high for the working class. He said his nearly month-old unemployment claim has still gone unanswered by the state and he knows many others in the same boat. How do incumbents lose their seats? When voters feel unheard.

Other Priorities for Parker

Perhaps the loudest voice right now is the protestors—worldwide now—calling for some wholesale changes to a variety of political, legal and social norms. Most prominent are calls from the Black Lives Matter movement to defund the police. And that’s where sayings like “extremes come full circle” and “politics make for interesting bedfellows” take on fresh meaning.

Although it’s as unfair and dismissive to paint a BLM activist with the wide brush of “radical left” as it is to place an “alt-right” moniker on Parker, if you’re stereotyping to save time, those are the two buckets in which you’ll probably place both. What ties them together, Parker notes, is the desire to shift the balance of power away from establishment and bureaucracy and over to individuals and local communities.

“When the executive branch (of any level of government) leads unilaterally and makes big decisions on its own, it’s going against the way our government was originally set up,” Parker, the founder of The Real 3%ers of Idaho, said.

For Parker, the defunding topic is more about de-militarizing law enforcement, examining the efficacy and constitutionality of things like no-knock search warrants, and letting communities decide how much armed patrol and armed response they need.

“When I talk to veterans who have come back from war zones, one of their biggest concerns is that the same control grid they saw there is being erected here at home,” Parker said, referring to what he described as “combat thinking” by law enforcement.

In addition to making sure the state is doing everything it can to help veterans, Parker said other priorities of his campaign platform include:

• Public access to public lands—“I’m a hunter. I’m a mountain biker. I want to make sure lands are managed with the public in mind.”

• Educational freedom—“From supporting homeschooling to charter schools, I think the money should follow the students.”

• National Guard protection—“The states should be able to say whether to use their National Guards unless the full body of Congress makes a declaration of war.”