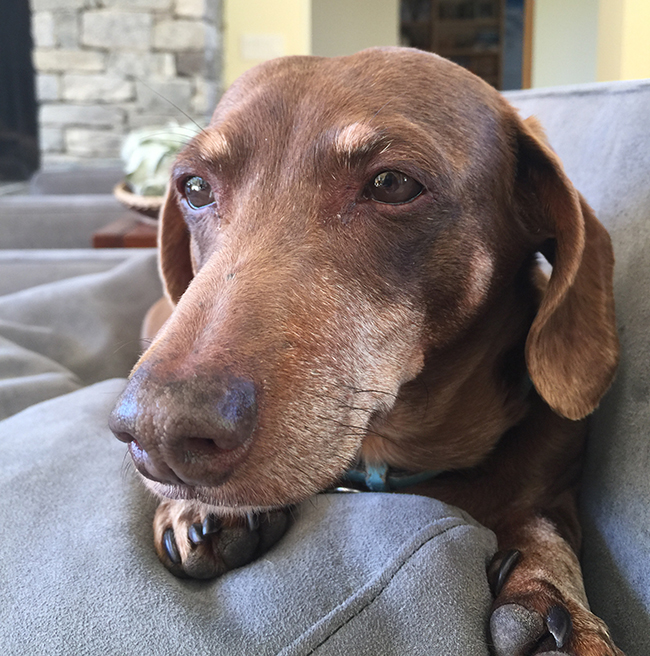 A little over 14 years ago, we got a miniature dachshund. Hilary picked him up on Christmas Eve and I spent the first night with Oscar curled up in our TV room both to keep him company and also to keep him a secret until we unveiled him to Georgia, Penelope and Simon for Christmas.

Since then, Oscar has slept with one of us almost every night. You would think, then, that I would have turned my attention to this major biological wonder a lot sooner. The wonder that is pets. Specifically, dogs.

It seems that pretty early on, humans spent time with dogs. Somewhat more accurately, we created dogs. A feat that usually reads something like: “About 30,000 years ago, humans domesticated dogs.” Whatever entry you happen to be reading probably goes on to talk about other pets and other timelines, without taking too much time to really expand or elaborate on this.

As soon as you do take a moment, someone says, “Dogs came from wolves.” Or more appropriately, “Humans domesticated wolves.” And this is where the crazy realization of what this means comes home to roost.

We domesticated wolves? When we think about this, we fall into a trap historians call “Whiggism”—it is reading history backwards. We look back from where we are now and assume that events are either predestined, or we transpose modern features onto the past. Like the idea that it was modern humans that domesticated wolves, instead of what humans were like 30,000+ years ago when the world was lit by fire, we had to walk everywhere, and we had yet to invent the bow and arrow.

In other words, we domesticated wolves when our houses were skin tents, caves, or crude lean-tos. We domesticated one of the most intelligent, social predators on the planet when the average person was carrying around a bag of seeds, some tubers, and some really interesting jerky.

I could go into the ‘how’ of this all day and never tire of thinking about our first ancestors who said, “Hey, maybe we should tame a wolf?” (I guarantee you this was a teenager.) I am just as interested in the ‘why,’ though.

I imagine our ancient forebears took on early wolf-dogs for protection and mutual hunting and the various practical reasons that get paraded around. But I am sure we kept wolf-dogs around for something else. A why that is simple and evident and straightforward to probably most people reading this, and which you can access simply by looking up to or around at your cat, bird, turtle, or dog. It is companionship. It is the power of a relationship that augments the best that we want to be and forgives the worst of who we are. It is unconditional love.

This is the power of another warm body curled up against you. Or a tail wagging in recognition. Or a head nudge to encourage a scratch, when perhaps you need the support as much as the pet.

My family had to say goodbye to Oscar at the end of May when he was somewhere near 102. We did so much in the same way as he came into our family—all of us gathered around, and each of us getting to kiss his head and say a final “I love you.”

Needless to say, I will think about Oscar often. One of the ways is to remember this gentle and powerful connection to the wild and all of the ways this little animal taught me how to be a better person.

Harry Weekes is the founder and head of school at The Sage School in Hailey.  This is his 50th year in the Wood River Valley, where he lives with Hilary and one of their three baby adults—Simon. The other members of the flock, Georgia and Penelope, are currently fledging at Davidson College in North Carolina and Middlebury College in Vermont, respectively.