The City of Ketchum, which has been the one to most recently update its policies, has now done its part to make people aware of it all. On May 18, the city held a sign-unveiling ceremony—with the granddaughter of one-time Ketchum mayor Guy Coles in attendance—to bring attention to the new policy that scooters are officially OK to ride at the facility, but only before 5 p.m.

“We wanted to honor the original vision of the park in that it was meant for skateboarding, but we wanted to be inclusive, too,” Ketchum mayor Neil Bradshaw said.

The park project began in 1994 back when scooter technology wasn’t exactly skatepark-ready.

Over in Hailey, the park has a more liberal curfew, 7 p.m., but a more restrictive access. Scooter riders cannot use the “bowl” portion of the facility, only the flatter space. And, they must have a park pass, acquired by passing a skills test.

Ketchum’s skater haven is not without its own restrictions. And the signage at the park makes it clear, and cool. Rather than produce a “typical” city-code type of sign, the city decided to outsource the design to a graphic designer Bradshaw works with on his monthly “Mayor’s Missive” and other projects.

The result was two “unveiling ceremony worthy” full-color signs. One is a nod to Mayor Coles’ efforts to make the park a reality. It includes a four-paragraph history as well as a visual timeline of the park’s development. The second sign is all about the rules, but done in the coolest way possible, with funky fonts, clever headlines, etc. To let skateboard, rollerblade, and scooter users know they are all welcome, the headline reads “ABSOLUTELY” and the disclaimer, use-at-your-own-risk verbiage reads, “HEADS UP!” For the rules and regulations sections, those are topped off with “Yes Please” and “No Thanks” headers. “Huge Egos” is one thing not allowed, as are “Marathon Runs”—the term for doing multiple laps at a skatepark without letting the next user have his or her turn. 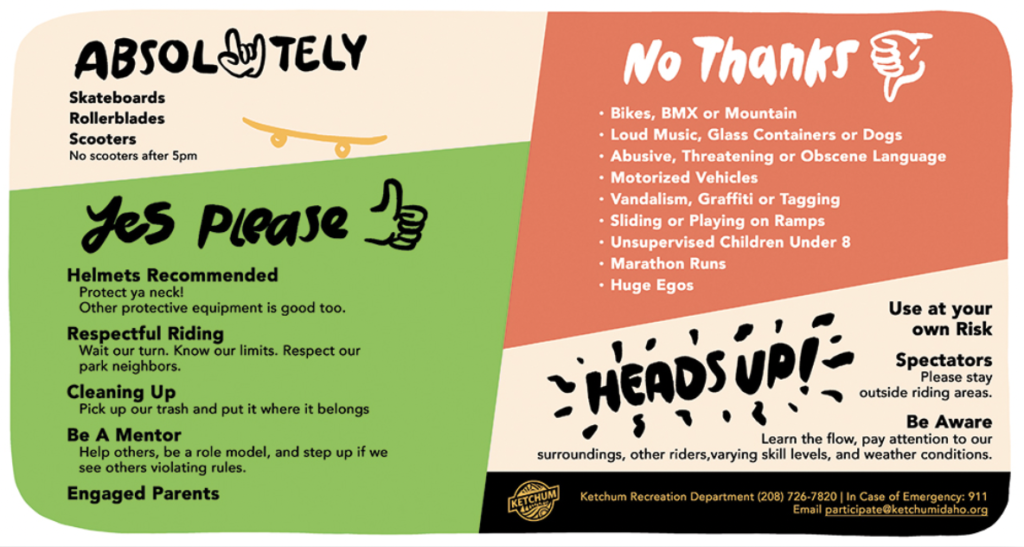